From rotation curves to the cosmic microwave background, the evidence that dark matter constitutes 84% of the matter in the universe is overwhelming. All that remains is to figure out what exactly that form of matter is. As a particle physicist I have the arrogance to believe dark matter must just be a new, as of yet undiscovered, fundamental particle. While it may feel like a leap to posit that measurements made at galactic and cosmological scales demand the existence of a new particle, keep in mind that the atomic hypothesis has proven a successful paradigm for all other forms of matter.

In spite of my confidence, we have never conclusively observed a non-gravitational interaction of dark matter. The current situation is summarised in the mock pdg dark matter entry to the right. There are more question marks than we might like for 84% of the matter in the universe. Indeed, one viewpoint is that the situation is an embarrassment to a field striving to understand the universe. Yet I see it differently, the most exciting discoveries related to dark matter lie ahead of us, discoveries my research strives to uncover.

I approach the challenge of dark matter through the lens of indirect detection. We know dark matter is distributed throughout the universe. If this substance is in fact made of particles, then it may be undergoing processes we attribute to the known particles; it could be decaying like the neutron, or annihilating as when an electron and positron meet. In such a scenario the decay or annihilation can create additional photons, neutrinos, or other particles, for us to search for in the astrophysical datasets collected by telescopes. 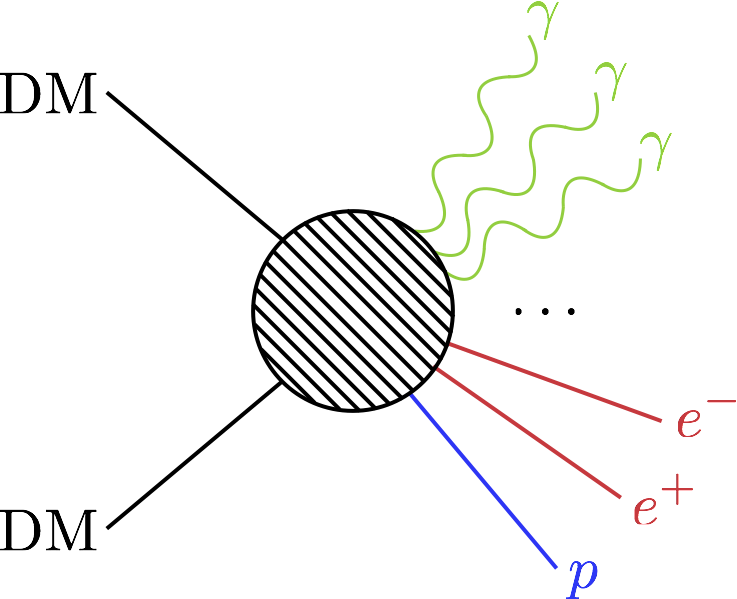 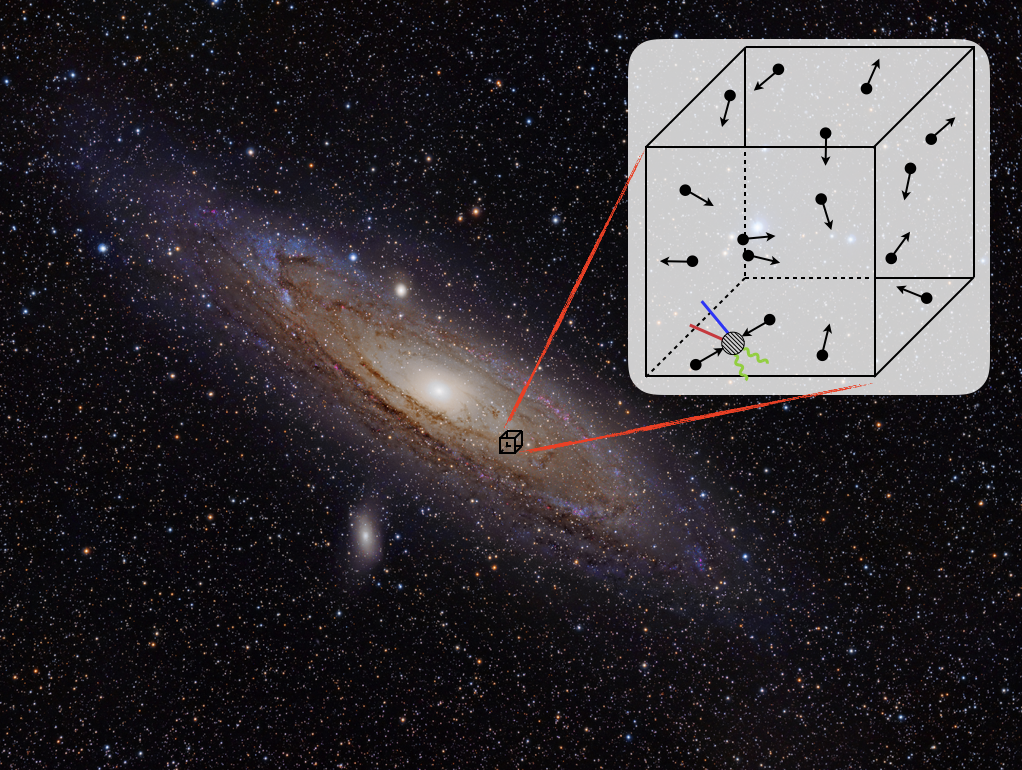 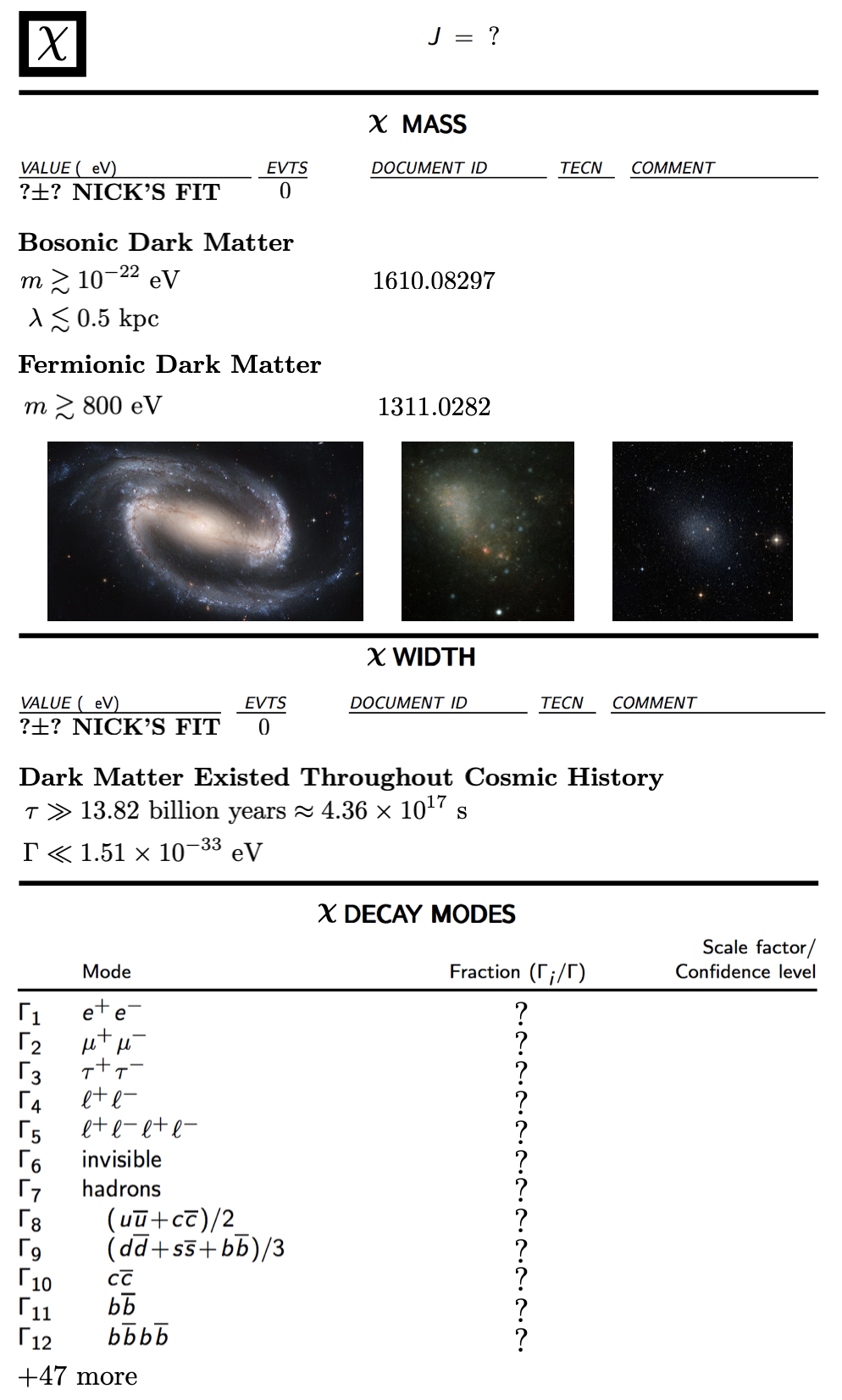 The probability for two nearby dark matter particles to annihilate and the details of what comes out of the collision is determined by the specific microscopic model of the dark matter particles and more generally by quantum field theory. In my research I look for unifying features among the possibilities, using either simplified models (e.g. 1511.08787) or effective field theory (e.g. 1612.04814). More recently, I've applied similar ideas to study output spectrum of dark matter decay. These techniques can be pushed to the heaviest dark matter masses possible - at the Planck scale - where the decay of a dark matter particle releases an energy equivalent to 500 kg of TNT. Our results, which appeared in 2007.15001, often differ significantly from existing approaches to the same problem, as shown in the figure on the right.

An accessible introduction to this topic, and an exploration of the connection between heavy dark matter and cricket, can be found in the Fall 2020 Miller Newsletter, where I was the featured fellow. 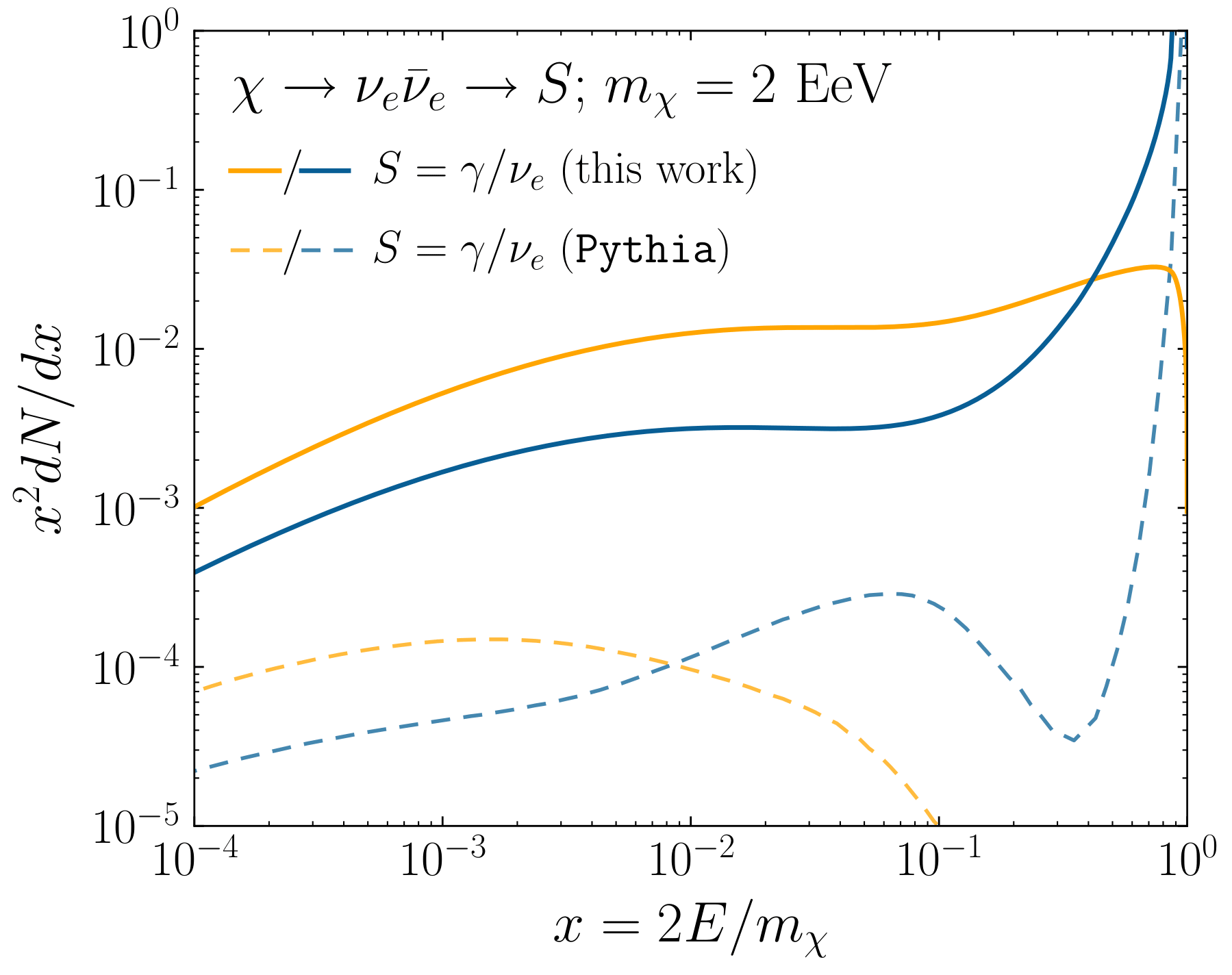 How is dark matter distributed across the sky?

To discover dark matter we need to know where to look. With this in mind, my research has developed the most detailed map for extragalactic dark matter annihilation (see 1708.09385 and 1709.00416). In the case of dark matter decay, I have made regular use of the fact that the Milky Way halo is an exceptionally bright source (e.g. 1612.05638 and 1710.10288). Further, in 1812.06976, together with Ben Safdi and Chris Dessert, I exploited this fact to exclude the possibility that the 3.5 keV line arises from a simple decaying dark matter scenario, as shown in the figure on the right. You can read more about how we did this in the writeups I made for the Nature Research Astronomy Community or The Science Breaker. 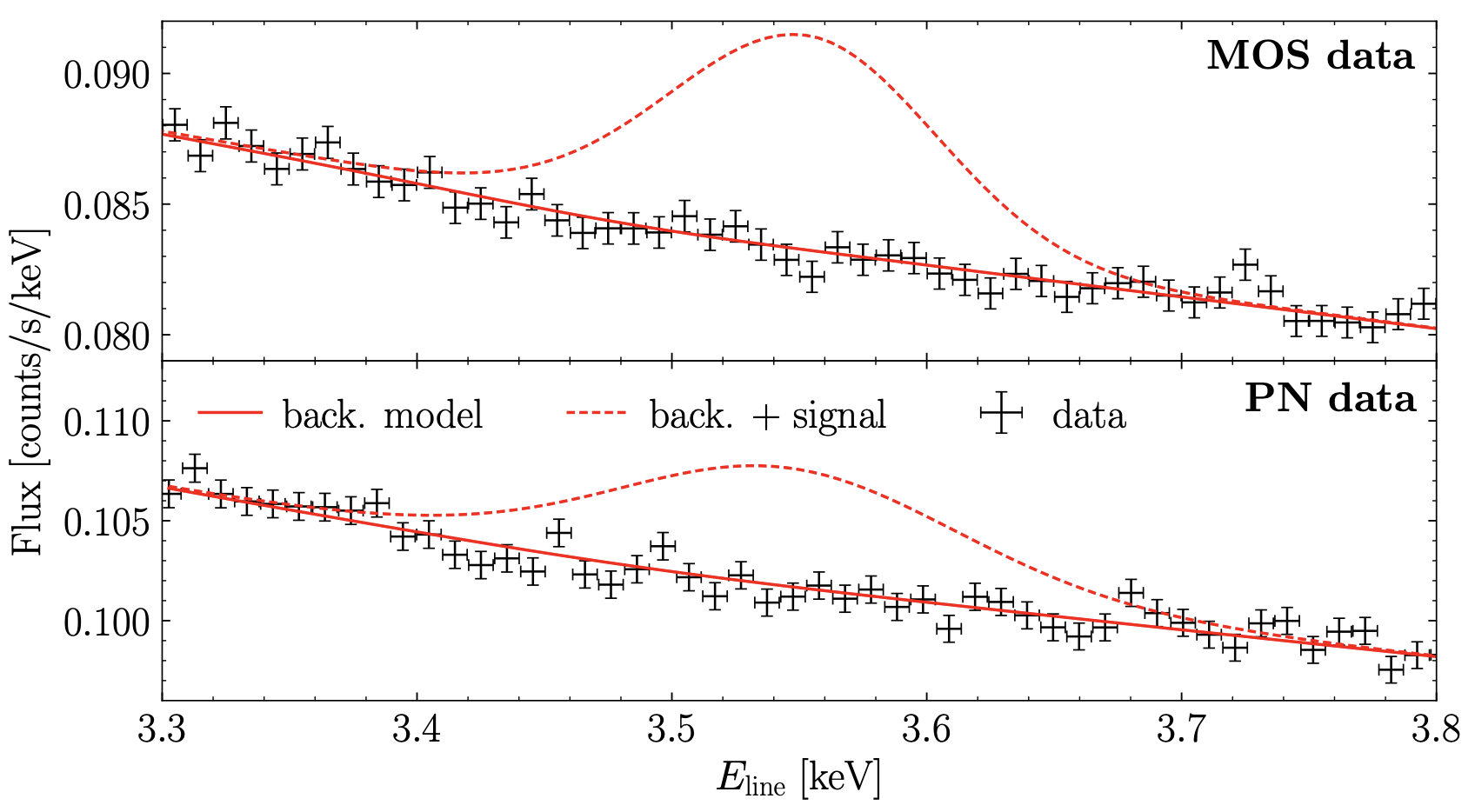 So you've discovered dark matter, how can you be sure?

There are compelling reasons to suspect we may have already seen a signal of dark matter annihilation producing gamma-rays in the galactic center (see e.g. 1402.6703). This is, of course, a significant claim, and has been rightly scrutinised. In particular, a novel statistical technique called the NPTF (now a public code) suggested the excess may instead originate from unresolved point sources. The evidence in favour of point sources is robust to novel techniques such as harmonic marginalisation (an example harmonic map is shown on the right). Nevertheless, it is fair to say the exact nature of the excess remains unclear and the debate continues. 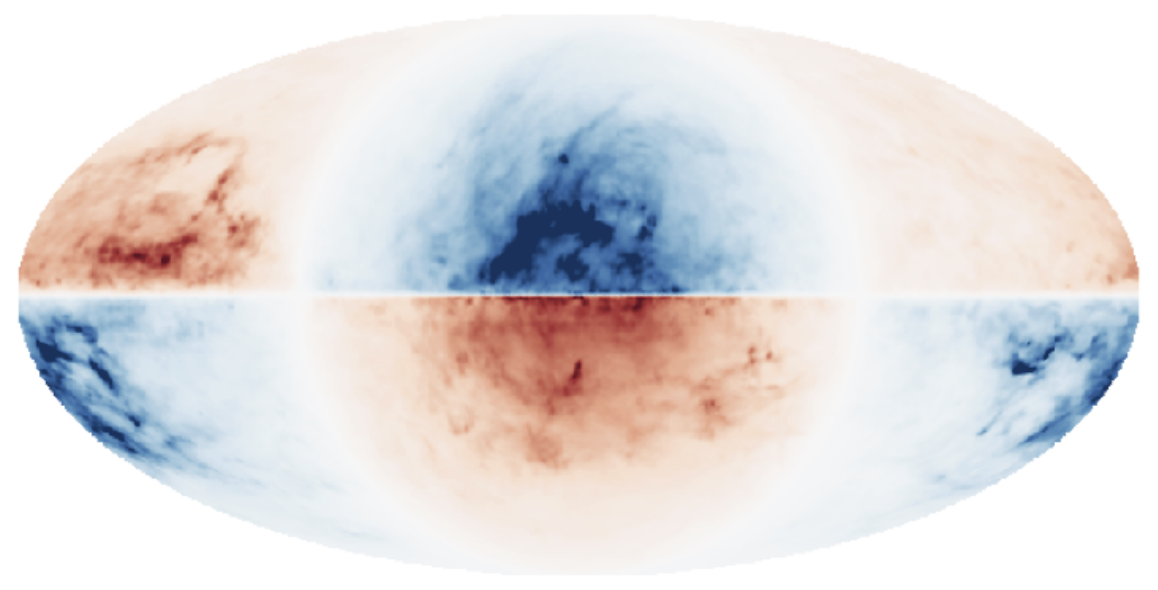 Searching for wave-like dark matter back on Earth

While remaining convinced dark matter is a particle, candidates such as the axion can be light enough that there are so many dark matter particles passing through the Earth that it becomes better described as a wave. This axion wave could then be detected through the subtle variations it induces in electromagnetism. In 1711.10489 my collaborators and I determined the detailed statistics of how an axion signal would show up in these experiments, and how that can be leveraged to uncover the full astrophysical properties of dark matter. I have also joined the ABRACADABRA Collaboration (yes it's an acronym) to put these ideas into action in one of the cutting edge axion experiments.

Further, by measuring the axion at two or more detectors, it is possible to perform interferometry directly on the dark-matter wave. This possibility, which I pointed out in 2009.14201, allows significantly more information about the dark matter to be accessed than possible with a single detector. Furthermore, the rotation of the Earth and thereby the detectors through the dark matter halo induces a variation in the interferometry pattern, as shown on the right. This is a novel daily modulation effect unique to wave-like dark matter. 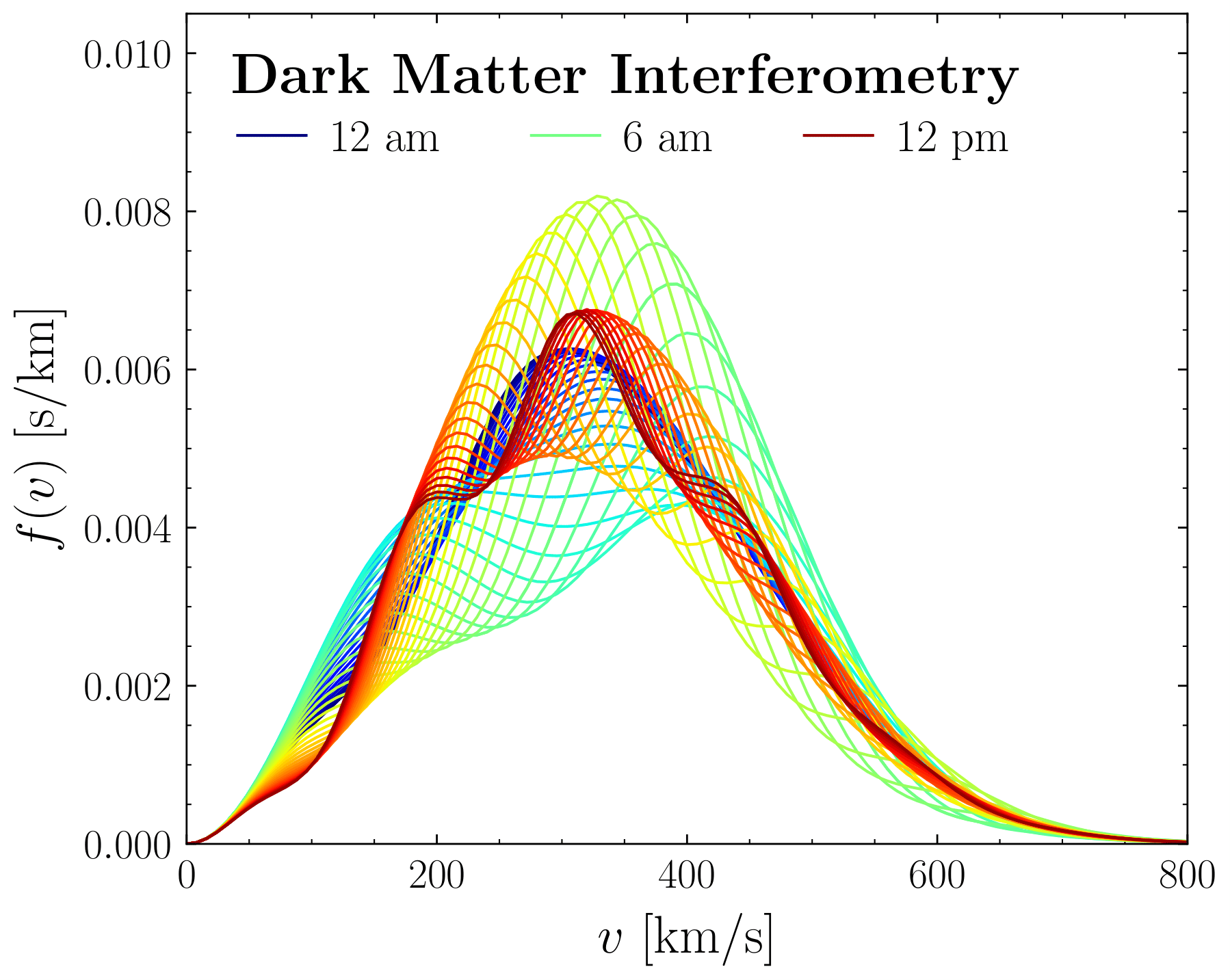 What can we say about new physics before we even discover it?

In the last few years, Grant Remmen and I have been working out how basic physical properties such as causality, unitarity, and analyticity restrict the possible ways new physics might appear. In 1908.09845 we discovered these properties impose a number of bounds on the Standard Model Effective Field Theory (EFT). Strikingly, the signatures of new physics are often forced to be correlated between different experiments. For example, models which predict higher order contributions to the neutron's electric dipole moment, must also produce a modification at the same order to jet signatures at the Large Hadron Collider. As we showed in 2004.02885, these ideas can be extended to fermions, revealing detailed restrictions of the allowed flavour structure that can possibly emerge.

In 2010.04723, Grant and I demonstrated that our results for fermions can be extended to the operators where the first deviations from the Standard Model are expected to emerge, the so-called "dimension-six operators." Our result made use of the spin of the particles in a fundamental way, by using a beautiful extension of the partial-wave analysis, known as the Jacob-Wick expansion. 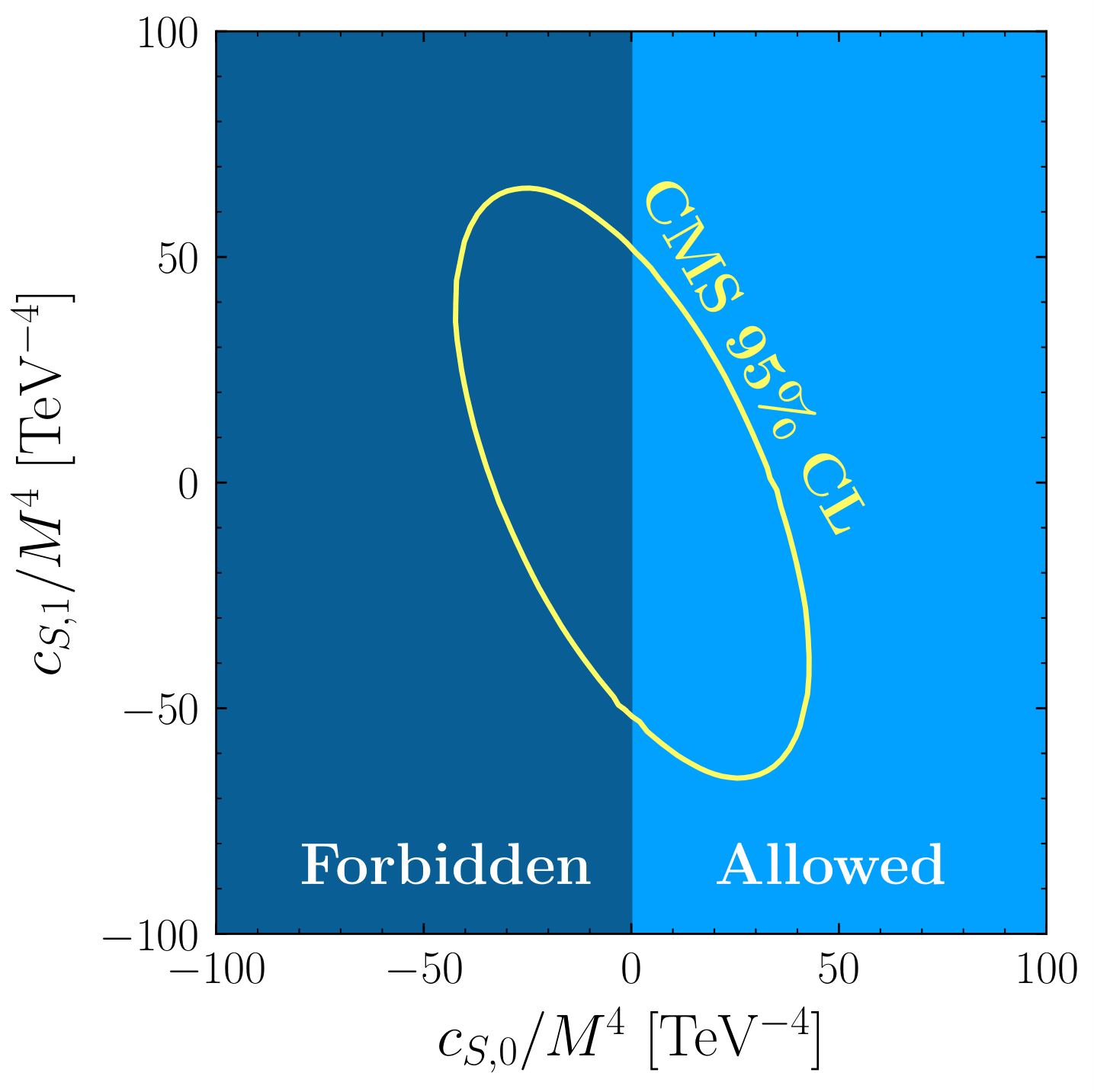